This is the background for the inside cover to my supply box for "ART IS YOU" in October. This was done in watercolor. It's probably the first time I've done anything in watercolor since I was in high school (a long time ago), except for playing around with splashes of color with my granddaughter. I don't try to do anything recognizable with her since she already looks at something she has done and says, "That's not good". And we have never said anything about her art work that wasn't positive. I'm sure that a watercolor artist would have some pointers, but I was pleased. This is the only copy of the original since it has since been transformed. This was my first attempt to do a gel medium transfer. I know that I'll do a few things differently next time. Once you lay down the gel print, it can't be moved thus the tilted table.
But it lead to a hand drawn tea cup slipping off the table as you'll see in a later picture. 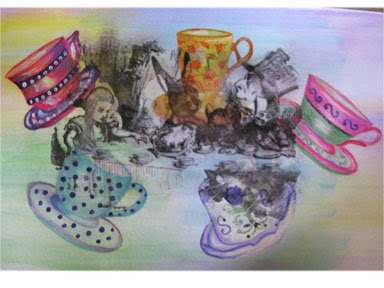 I had a vague idea of what I wanted to accomplish, but this progressed as an "OK, what do I want to do next?" project. I had purchased an Alice in Wonderland stamp set, and thought I wanted to use that so those went down next. Then I used the curved part of my pie shaped stamp pad to add a border. 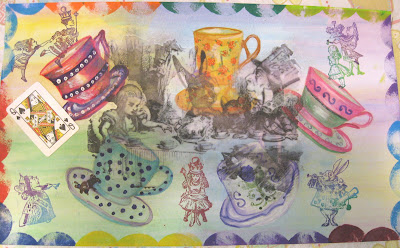 A few quotes, some scrolls in the border, a frame around Alice under the table, a few added items, and done. Well almost done. I finished with a coating of gel medium tinted with irridescent copper acrylic to tie it all together. When I showed my husband, he said it looked like dream. 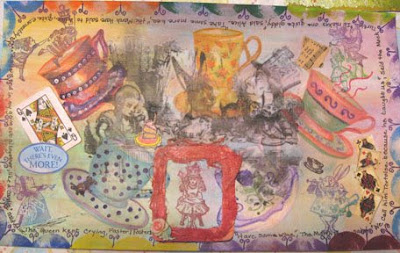 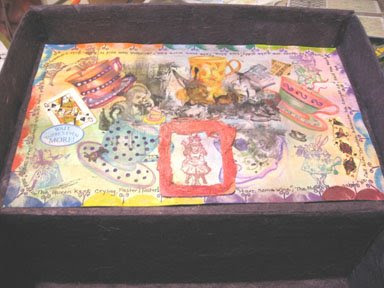